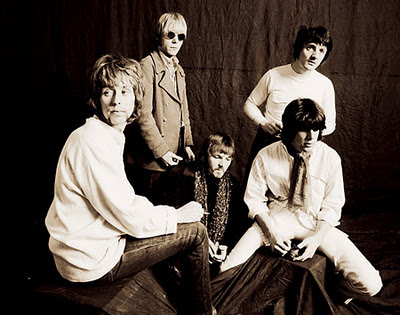 Listen my friends, and I'll tell you about Moby Grape. They were tremendous and tragic, sublime and perverse. They had five members - Skip Spence, Bob Mosley, Jerry Miller, Don Stevenson and Peter Lewis. Spence played guitar, sang and wrote some of their best songs. Mosley played bass and howled like a white Otis Redding. Lewis also sang, and finger-picked beautifully. Miller was responsible for some of the most stinging lead guitar in rock history, Stevenson for some of the most kinetic drumming.

It doesn't end there. All five of the Grapes sang on record and in concert; one of the particular glories of their early work is hearing all those voices colliding with each other. Their incendiary guitar interplay was almost with parallel: at the time, only Buffalo Springfield could boast of three guitars playing in tandem (and they fought so much, it was usually two). In addition, all the members of Moby Grape were song-writers, right from the first album.

There's more. Moby Grape was a failure almost as soon as its first album released, overhyped by the record companies, embroiled in legal battles, destroyed by drugs and disagreements. Spence, and later Mosley, would wander off into the thickets of schizophrenia. What makes this even sadder is that that first album, Moby Grape, was an unmitigated masterpiece. Opening with the caterwauling, almost ridiculously exuberant "Hey Grandma", it runs through r&b ("Mr Blues"), country rock ("Ain't No Use"), delicate balladry ("Someday", "8:05") and jagged, jet-propelled rock ("Indifference").

And there's "Omaha", a song that should be bracketed with "Johnny B Goode" and "She Loves You" as one of the most unstoppable, shout-it-from-the-mountaintop unhinged force of nature rock 'n roll singles ever. It's a driving, breakneck love song to friendship, centering around the repeated phrase "Listen, my friends". The Grape were a product of the '67 Summer of Love scene, and it shows in the lyrics that go from earnest ("You thought never/ but I'm yours forever/ Won't leave you ever") to poetic (No more rain/ From where we came) to carnal ("Get under the covers, yeah!/ All of your lovin'/ Beneath and above ya/ Bein' in love!) in the space of a few paragraphs. Under, beneath and above are also where the guitars are at; never breaking for a second to admire themselves or see what the others are up to. I've added both the studio version and a live one from Monterey Pop below; the latter has an extra guitar break that arrives after the famous opening riff and before the vocals arrive. It is A) as good a reason for the enduring legacy of this band as any - those few odd seconds approach a ragged perfection that many other bands wouldn't be able to touch after a dozen albums and three reunions tours - and B) so good I could weep. Which is the way I feel about Moby Grape in general, and Moby Grape, the album, in particular.