Films about couples who’ve lost a child are invariably a bruising experience. Often, it’s not just the dark subject matter but also the fact that directors faced with such material often try to break though the sorrow with shocking dramatic devices. Nicholas Roeg’s Don’t Look Now had a serial killer dwarf. Lars Von Trier’s cheery Antichrist had genital mutilations. By those standards, Rabbit Hole is pretty tame. Sure, Nicole Kidman starts stalking a high school student and Aaron Eckhart trades group therapy for getting stoned in a car, but compared to a self-disemboweling fox, that’s practically normal. 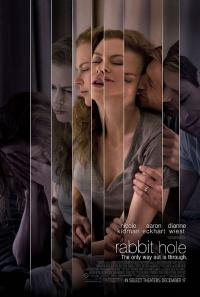 Rabbit Hole is about a couple, Howie and Becca Corbett, who lost their son in a car accident outside their house. Eight months have passed since the tragedy but they’re still struggling to return any semblance of normalcy to their lives. The film shows how all-pervasive grief can be, how it can ruin anything from a conversation with a friend to a trip to the supermarket. David Lindsay-Abaire’s script, adapted from his own 2005 play, allows Howie and Becca moments of humour and spark, but their personalities mostly remain submerged, like icebergs in a sea of sadness.

Grief without catharsis is one of the least rewarding cinematic experiences, which is why so many sad films end up veering towards violence, be it physical or mental, or high drama. Former indie director John Cameron Mitchell may have considered these devices tawdry, but the downside of this restraint is that Rabbit Hole remains tied-down in its grief. Early on when Becca says “Nothing will ever be nice again,” one assumes it’s just a low moment. By the end, though, you end up agreeing with her. Though there’s little to fault in this movie, there are hardly any moments you’d like to take away with you either.

getting stoned in a car IS normal!