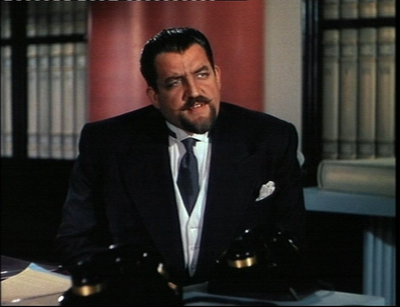 Billy Wilder, the great American director, used to have a sign over his door that read “What would Lubitsch do?”. Wilder, who got his start writing for Ernest Lubitsch, was his biggest fan, and in Cameron Crowe’s book-length interview, he put his finger on a vital element to the German-born director’s success. As he explained, “[Lubitsch] realised that if you say two and two, the audience does not have to be told it’s four”. No matter how mannered it may seem at first glance, Heaven Can Wait has two and two all over it.

The film begins in hell’s lobby, with an aged Henry Van Cleve (Don Ameche) recounting his life story to a dapper, courteous Satan (Laird Cregar, addressed throughout as “Your Excellency”). Henry’s convinced his love crimes warrant a place in the netherworld, and counts down a list of his infidelities, beginning with his French teacher and continuing up to his cousin’s fiancée Martha (Gene Tierney), who he elopes with and marries. Though their marriage is a happy one, his eye continues to rove. None of this, of course, is meant to be taken seriously. Heaven Can Wait unfolds like a stage musical without music, set to the sounds of Sam Raphaelson’s sly script and Ameche’s mellifluous line readings.

By the time this film released in 1943, Lubitsch had a deteriorating heart condition. He died four years later – in bed with a young starlet, his biographer Maurice Zotolow claimed. If that is so, then Henry’s end in the movie, with death interrupting implied coitus with a nurse, was an uncanny foreshadowing of his own fate. “No more Lubitsch,” said Wilder at the director’s funeral. “Worse than that,” replied fellow-director William Wyler, “no more Lubitsch pictures.” They weren’t exaggerating.

A version of this review appeared in Time Out Delhi.
Posted by a fan apart at 4:21 AM