Away We Go: DVD Review 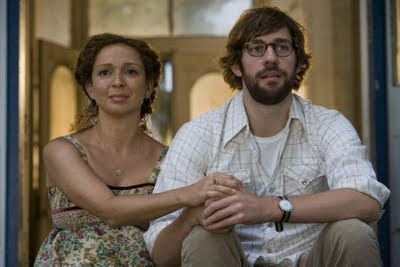 Ever since he debuted with American Beauty in 1999, Sam Mendes has, in his polished way, spent his career taking different aspects of American life apart in films like Road to Perdition, Jarhead and Revolutionary Road. Now, with Away We Go, he’s given himself a chance to deconstruct his own process. By doing something that few big-ticket directors ever come around to – making a small movie, writer-led and not dependent on stars, as he states in a making-of segment – Mendes is pushing himself to see whether his art remains relevant when one removes the advantages that Hollywood affords.

Burt and Verona, unmarried but very much in love, are expecting their first child. When Burt’s parents, their reason for being in Denver, inform them that they’re going abroad for a few years, the couple sets off on a cross-country trip to find a place they can call home. The film subscribes to a brand of deadpan eccentricism pioneered by Mendes’ own American Beauty and more recently, Little Miss Sunshine. Nearly everyone Burt and Verona meet is more than a little unhinged, from a mother who calls her daughter a dyke and asks her to do a “tough-girl walk”, to another who believes that strollers are evil. While the supporting players are all talented (Maggie Gyllenhaal, Jeff Dianels, Allison Janney) there’s no real sympathy for any of their characters, and the scenes involving them end up a compendium of outlandish, if inventively humorous, situations.


The leads, though, are fleshed out beautifully. It helps that the writing team – writer and columnist Dave Eggers and novelist Vendela Vida – are husband and wife. They have a great ear for the speech patterns of married people, with all the assurances given and compromises made from sentence to sentence. John Krasinski is funny and endearing as Burt, a bearded, bespectacled, supportive square. And fans of Saturday Night Live will find Maya Rudolph’s performance as Verona a revelation. With Krasinki the more animated of the two, she sails just under the radar, her unconventional-by-Hollywood-standards face registering half smiles and occasional panic. These two are the main reason Mendes’ film ends up being touching and relatable, when it might otherwise have been ironic or arch. Included are a nice set of bonus features, including interviews with cast and crew, audio commentary by the writers and director, and a segment on how everyone who worked on this film tried to keep the process eco-friendly.

A version of this review appeared in Time Out Delhi
Posted by a fan apart at 11:44 PM