Notes on 'The Fallen Idol' 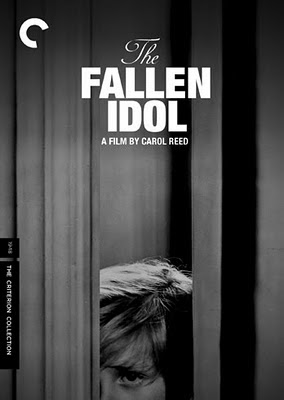 Carol Reed is justly famous as the director of the classic ‘The Third Man’. Set in post- World War II Vienna and starring Joseph Cotton, Trevor Howard and Orson Welles in a movie-stealing cameo, its noir shadings cast their influence far and wide (and, as Scorcese’s The Departed demonstrates, they still reverberate). The casting of Welles, though, had the unfortunate after-effect of people questioning Reed’s artistry and his role in the ultimate shaping of the film. Welles was never one to shy away from credit and many critics were over-eager to see his hand in every aspect of the film, right from its script to its marvellous use of light and shadow. This is part of the reason why ‘The Fallen Idol’, directed by Reed and released a year before Kane is such an important film for those looking to restore his reputation as a genuine auteur of the highest degree.

Like ‘The Third Man’, ‘The Fallen Idol’ was also was a collaboration with Graham Greene (Greene would also write the script for Reed’s ‘Our Man in Havana’). The story concerns the desperately sincere attempts of a little boy to shield his beloved butler, the titular ‘idol’, who he believes is guilty of murder. Though the camera takes a third-person stance, we are mostly seeing the tale through the boy’s eyes, resulting in a fascinating twist on Hitchcock’s ‘wrong man’ films. Under Reed’s direction, the remarkably clever script plays out like a miniature neo-noir thriller. Rarely depending on the night to provide darkness, he exposes the danger lurking in everyday lives - like a visit to the zoo, or the young boy’s fascination with snakes.

This material may actually have worked well as mid-period Hitchcock, though I believe it would have fallen short in one respect. Hitchcock, chronicler of phobias, ever mistrustful of the human race, would have had to reach somewhere very deep inside to create the warmth between boy and butler, something which Reed does beautifully. A great director of young actors, he coaxes something special out of Bobby Henry here, even though he later noted “A child of eight can't act. A good actor must take something away, lose a part of himself before he can create a role. But with the right sort of child such as Bobby, there is nothing in the way. There is absolutely no resistance. He will do everything you tell him". When I first read that remark, it immediately reminded me of Spielberg, that other fine director of young actors, and it was no surprise when I later found that Carol Reed had been an important influence on him. 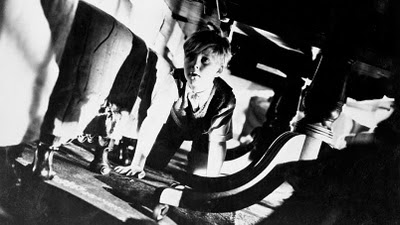 The butler, Baines, is played by a doyen of the stage and screen, British actor Ralph Richardson. His vocation requires him to keep his manner measured at all times, which makes it even stranger the manner in which Richardson convinces us, minutes into the movie, of why his character is deserving of such unquestioning idolatry. His precise line readings amplify the nuances in Greene’s script, which is, as befits a slumming novelist, ever-sensitive to the small gesture. As his character gets further and further embroiled, one expects Baines to take it out on the boy. But he never gets cross, never cracks under pressure, and wins our sympathy all the more for it.

One reason this movie works so well is that there is barely a wasted scene in its entire running length. One scene in particular, half way into the movie, stands out for me as a perfect balance of plot furthering, social commentary, subtle class comedy and suspense. After a midnight run through London which is every bit as visually expressive and suspenseful as the famous stalking sequence in ‘The Third Man’, Phillip is brought to the station by a kindly policeman. The officers there try and get him to talk, but instead he goes to the nearest thing to a mother figure in there, a street walker brought in for questioning. Her attempts to try and talk to him are hilarious because she’s obviously forgotten how to carry on a conversation without propositioning someone. It is fitting that the scene ends with a remark concerning a character’s implied infidelity. It’s a seemingly throwaway moment, but on closer inspection illuminates the irony at the centre of the movie - how betrayals carried out without the intent to betray can be more dangerous than the regular ones.