A PRAYER FOR THE RECORD COLLECTOR 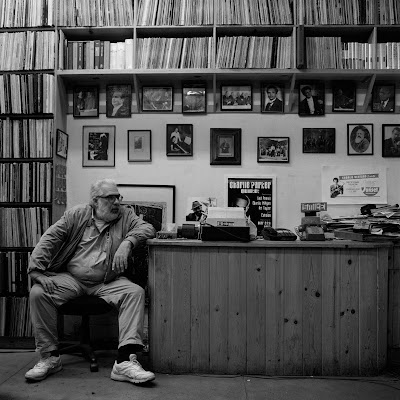 Serious record collectors are always in need of prayer. This is not because they have sinned any more than their fellowmen, but because they are in purgatory. Their existence is simultaneously haunted by, and given meaning to, by the same thing – the records they collect. It gives them a reason to live, and yet it is also the source of a gnawing emptiness that eats away at their lives. Records keep their existence from becoming a colourless hell-hole; they are also what stand between them and absolution - that great big room full of albums in the sky.

Is there a difference between a collector and a serious collector of music? Or a collector versus an accumulator of music? There are, and the great tragedy is that no one except serious collectors cares about these distinctions. Collectors have never been able to come to terms with this fact, and those who continue to harp incessantly on about them find themselves cast out from polite society. Perhaps that’s just as well. True collectors have and always will be a sub-species, alienated from the mainstream. In High Fidelity, Nick Hornby describes what a true collector look like - “…young men, always young men, with John Lennon specs and leather jackets and armfuls of square carrier bags…young men who spend a disproportionate amount of their time looking for deleted Smiths singles and ‘ORIGINIAL NOT RE-RELEASED’ underlined Frank Zappa albums. They’re as close to being mad as makes no difference”

I may as well confess that I am one of these aforementioned collectors, have been one for years now. The realisation dawned on me when I realised I was barking at classmates who replaced ‘Automatic for the people’ with whatever Outlandish came out with in 2002, in their car stereos. I also started making giant lists of the CDs I would buy as soon as I could afford them. Like Kanye West put it “I always had a passion for flashin', before I had it I’d close my eyes and imagine”.

As my collection started to take shape, it became intertwined with the guilt on spending my parents’ money on cassettes and the occasional CD. When I finally started earning my collection accelerated. The old guilt was gone, replaced by newer and more evolved guilts. I will speak about these, and outline other characteristics which I have come to believe are universal to all serious record collectors. I have, if you will, managed to pinpoint symptoms of the disease even as I suffer from it. I now present before you…

To the casual glancer, collectors and accumulators may appear as one and the same. But there are important differences. One, accumulators may think they are collectors, but collectors know they are not accumulators. Two, accumulators are the kinds who would collect the entire discography of an artist and keep it in their hard drives, because, like Mount Everest, it is there. A collector always knows the value of that which he collects. Three, accumulators will normally not be familiar with their musical collection; true collectors will have heard (or at the least, intend to hear) everything which they own.

Serious record collectors would never have been able to continue being what they are unless they were experts are rationalising their bordering-on-obsessive behaviour to themselves. Take, for example, the variety of explanations a collector could give oneself for picking up a particular album…

“This is a really good album”

“This is a really rare album”

“I don’t really like this album, but it’ll complete my collection”

“ said that he stole every note he ever played from , so I have to hear this”

“I know every note of every song on this album, but I still don’t own it on CD”

“I have this album, but only on tape”

“I didn’t really take to this band on first hearing, but its got such good reviews that I think if I sit with it, I’m sure I’ll get it after a while”

Serious collectors know exactly what they should buy. They understand the consequences of having to live with themselves after missing out on some essential purchase and thus take all possible steps to avoid such a catastrophe. They know entire discographies of artistes relevant to them. They know what their album covers look like. They know which artistes are good for singles, and which ones should be bought album by album (only a serious collector could explain how it is acceptable to buy ‘Motown Legends: Martha and the Vandellas’ but a deep insult to music in general to buy ‘Bob Dylan’s Greatest Hits’). They may take a risk on an unknown Iceland post-punk band, but it’s not really a risk if Blender, Pitchfork and Rolling Stone all have them on their ‘Artistes to watch out for’ list, is it?

Have you ever observed serious record collectors when they are in a shop? If you did, you’d notice that they follow certain regimented patterns, as sacred to them as palette cleansing is to a wine-taster, or push-ups to an athlete. First they will check for new releases (no record collector likes to be left behind). Then they will scan the racks perfunctorily, looking for new albums which may have turned since the last time they were there. Finally, they will settle down and really start looking – artist by artist, shelf by shelf. All the while, they are carrying on an internal dialogue with themselves. It goes something like this - “Hmm…Beatles, Live at the BBC…I know its great but I picked up the White Album last time…better give another decade a chance…there’s that Radiohead album I wanted to pick up a few years ago…how much am I missing out by not picking it up? How much money do I have? Should I be spending this much…oh shit, there’s an offer on a 2CD+DVD thingy on I.R.S-era R.E.M…I don’t really need this…but it’ll complete my collection…damn it, I’ll take them all…why else am I earning…”

Normal people don’t really care whether people like the music they have or not; as far as collectors are concerned, you’d be on safer ground criticising their passed-down-for-generations recipe for soup than their Toots and the Maytals albums.

Normal people gaze at CD racks in a music store and move on if nothing interests them. Collectors bend, kneel, contort themselves. When they glimpse a CD they didn’t expect to find there they clutch at it like hobbits clutch at rings.

Collectors never ask the store-helpers for assistance – this is their alone time. They do not want advice, or indeed anyone in their line of vision. They are aware that the language they speak in is different and all they want is to be allowed to go on speaking it.

Would you want to meet the kind of person described above? Be honest. You are not alone. The only people who can stand serious record collectors are other serious record collectors. Their lives are grey and dismal. They have a finer sense of guilt than most. Why are they seen as different? Why do little children shy away from them? Sometimes they daydream for a while and imagine that the world has come to see them as Gotham City saw the Dark Knight, as the kind of hero they deserve but do not need right now. A masked crusader, swooping in at the last moment to prevent them from buying ‘Led Zeppelin on Panpipes’. But then they wake up and realise that the truest thing about a serious record collector is that they are, like all uncompromising souls, destined to be alone.